Anyway, I don't know if it's a good idea, but anyway.

Yesterday Google refused to do April Fool's Day pranks because of coronavirus-related issues. This is not the first time they miss out, they did the same back in 2001 and 2003 for unknown reasons. Back then, Google was just a site. This was before Google diversified its services, like buying YouTube.

Here at the forums, some of us used April Fool's Day pranks to deviate ourselves from news of the ongoing pandemic. One user went too far and made a thread for a fake Coronavirus movie that WB was doing, when, in reality (and this was before I clicked the link) I had stipulated that WB's film Contagion gained a large following in these times of uncertainty. Guess it wasn't included as part of the combined threads.

But anyway, on to less serious things, and this just shows one of the flaws of the forum. @SweetShop209's posts had links to unrelated YouTube videos as links, but for some mad reason, the videos were embedded under the text itself, which just ruined the fun, even if there was a basic "April Fool's!" message after the videos.

Usually every year I do a basic "Fish Hooks should be a show about mermaids" prank, however I kept it at a minimum this year, opening two threads with exactly the same content (you have to blame the first timeout at 10pm WET - 5-7pm your timezone). Due to the outbreak, more people are at home and in the age of the internet, websites can go haywire. This is a frequent issue nowadays. Anyway I tried to bring in something new, like adding A&W jokes or letting Disney buy the FOX network and rebrand it, but technically the merpeople jokes are still there, and second to me in this kind of jokes this year was @LinusFan303 who came up with ideas for twelve Loud House spin-offs, one of them involving them as merpeople and living near Bikini Bottom. These two shows need to cross over some day.

Onto the jokes that never made it, sadly, and they both involved merpeople:

The first one was about Grumpy Cat being revived as a mercat. Grumpy Cat died last May yet I didn't have the time to do so. I was going to use this picture (Grumpy Cat looks better as a mercat ) but I didn't give any clear purpose. 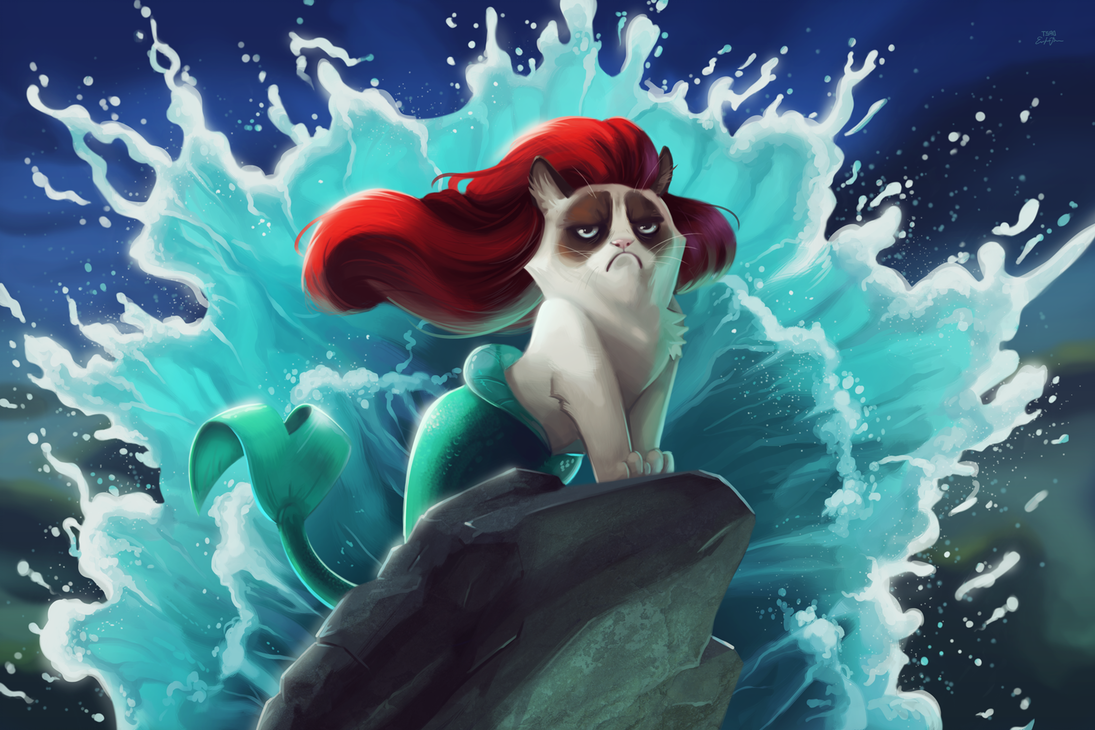 Second was Thanos, hot off him being popular again because of Endgame, released weeks after last year's Fools in April. My idea was that the next film was going to have Thanos as a merman, somewhat like this: 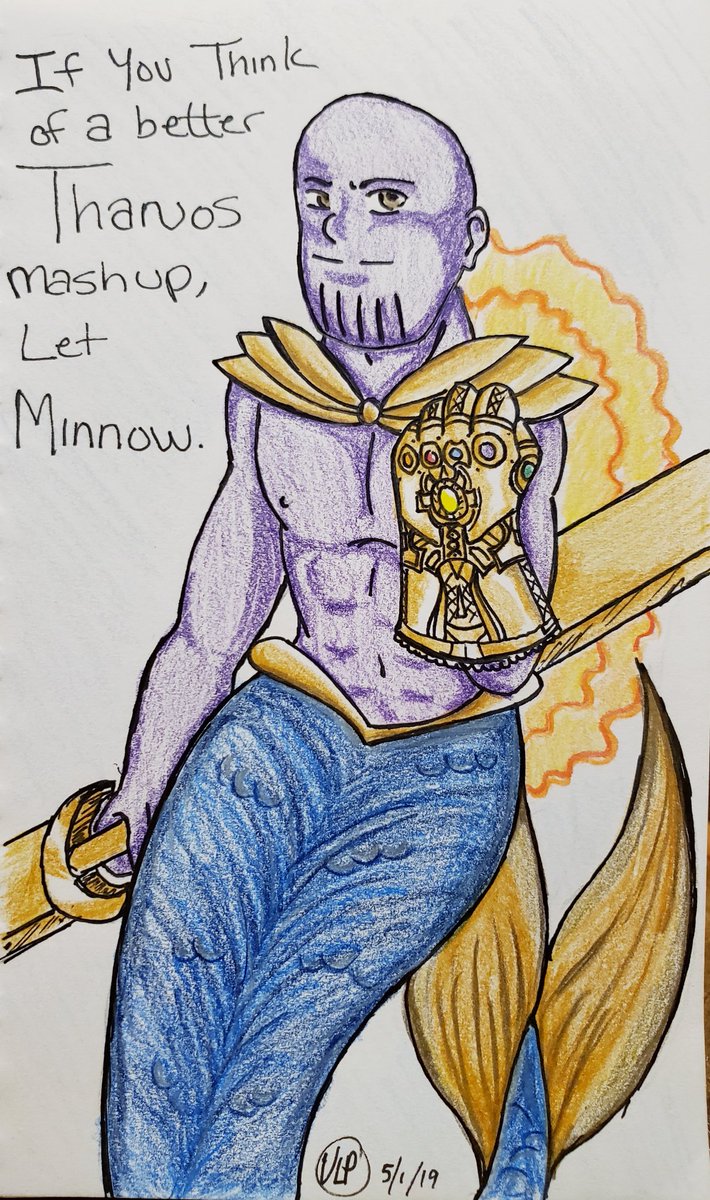 Lastly after the success of Total Dramarama, I had plans for a mermaid version of Total Drama's characters, but I didn't have the time. All I know about the aborted prank was that it was going to air on Teletoon in Canada and that no USA broadcaster has been decided yet. I can share you these images that were made like ages ago (during the height of TD) that I found on Fanpop. DJ as a merman and a TD-TLM parody where DJ plays King Triton. 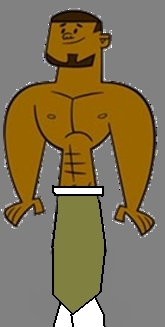 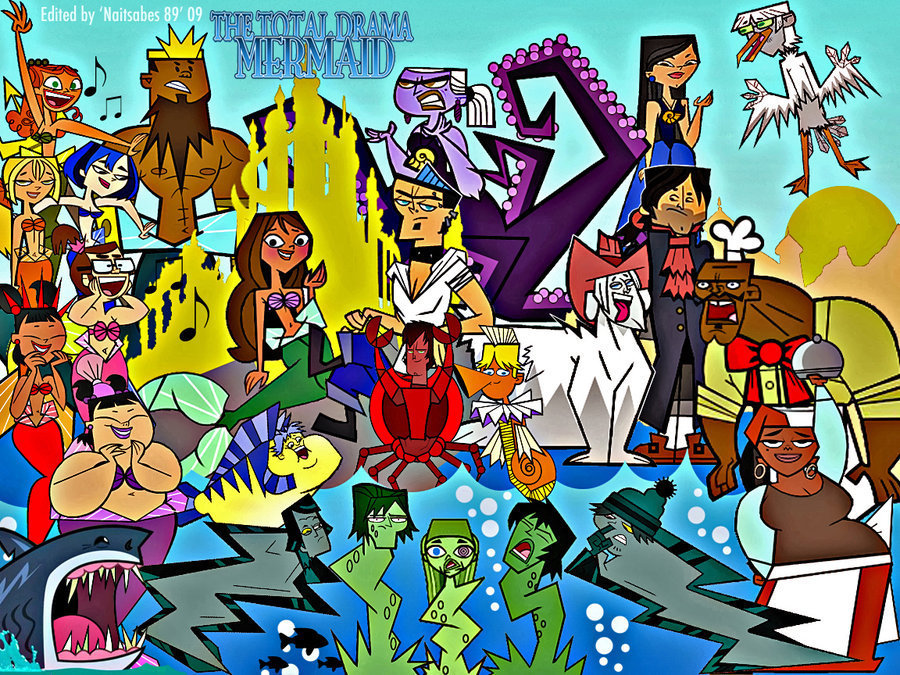 Oh well. April Fool's Day comes but once a year. Though this year it didn't have the power as previous years (I especially liked 2014 ), you might partly blame it to users leaving Toonzone/Anime Superhero in a way to concentrate on other things, like Gatordragon concentrating more on art (his Twitter) and so on, even I made a few drawing tests lately, one of them was used as part of CN's pranks for 2020 - one of them regarding the Hall of Game Awards being postponed is still active and this might fool users in believeing that CN brought them back. Either way, it did get past page 5.

Here's hoping that next year will be bigger and better than ever!

Honestly? I found April Fool's Day quite harmful this year. There are other ways for people to lighten tension and have fun beside making the internet utterly useless for an entire day when people are desperately seeking out new information about a life-threatening situation.

Just so you guys know, it's not funny anymore, and it wasn't even before the pandemic. It's essentially everybody making a ludicrous fake news thread / article on an agreed upon day and saying "Got ya!" every time somebody clicks it, even if they know exactly what the joke is ahead of time. It's not funny because it's not actual comedy. Comedy involves a variation of routines and funny twists. April Fool's is just the exact same "joke" over and over again. Comedy can be made funny through repetition (see Sideshow Bob and the rakes) but that only works if you puzzle out the correct number of times it's funny. It's not actually funny if it's infinite.

And let me just say that Coronavirus thread was the sorriest thing I've seen on this website in awhile, at least since politics were banned from Cafe. The person who made it should be ashamed of themselves.

This is me being the turd in the punchbowl. Keep drinking that punch if you must, but I'll still be floating here.

What really puzzles me was that they deleted all AFD posts from Cafe Toonzone days after AFD last year, and none of them had to do with politics.

My first prank was planned days ago, I had to build an idea for a scenario where Disney gets greedy and buys the FOX network forcing its remains to go to MyNetworkTV. MyNetworkTV is irrelevant nowadays, and I was mostly joking about that. I tried to keep the outbreak as a minimum and had to say "when the situation stabilizes".

Wasn't too active during this year's April Fools shenanigans compared to last year when I must've posted over 20 threads. Aside from being far busier with work this time around, I just couldn't think of fake thread ideas that sound ridiculous enough to be funny, but not so outlandish that it sounds forced, like saying The Simps was renewed for 100 more seasons or something.

You know what makes a good prank? No sources. Even if the link is automatically displayed as an embedded video, it doesn't work properly at times.

And I also had some work to do yesterday, something that made pranking difficult.

I only had one contribution of my own, and it was one I was itching to do (I thought of doing it on CN before realizing Nick would be more relevant now). I also commented on some of the other threads around, but that was about it. I dedicated the day to other things as well, including a joke I did on Discord (not on the ASH sever) and going for a mini-hike in the woods (with no one but a family member).

I was actually thinking yesterday, "Couldn't there be a way to separate the April Fools material from the regular stuff? That way, they won't get confused." I thought of having someway to mark such threads with something to indicate jokes. Or maybe even a dedicated forum, one for those who are interested in joke material (albeit only active one day a year, it would seem).

I tried to act like I’m an animation fan from 2000. That’s why I was asking people if they watch Cartoon Cartoon Fridays or they have Toon Disney.

Oh yeah, I just remembered: part of the reason I did a gag referencing the Garfield and Friends episode "Video Airlines" was because this website did something with it many years ago. Back when the design had different cartoon images on the left of the top bar, one April Fool's Day had it so said episode was the only image represented.

I saw someone on Facebook saying that Disney+ was going have the original unalteed versions of the original Star Wars trilogy as an April Fools prank. Fortunately, that's all it was, but I have a couple issues with teasing Star Wars fans with this:

!. I think, and this is a theory of mine, that George Lucas had it written into his contract when he sold Lucasfilm to Disney was that only the Special Edition versions of the original SW trilogy could be released, as a final "up yours" to fans who lambasted the Sepcial Editions and the prequels.

2. If, and that's a might big IF, the original unaltered versions do get released in some way by Disney, you'll know about it, i.e, news all over the web and TV from Disney-owned sources like ABC and such. They'll send out official press releases touting the fact, basically.

Just wanted to get this off my chest.

Interesting thought: in the past the bulk of my jokes was about Cartoon Network buying things. Now that Disney is the "in thing" when it comes to buying properties, the Disney April Fool's Day thread collection ended up being longer than CN's. Part of this is also because I lost my interest in Cartoon Network.
You must log in or register to reply here.

K
kanc
I'm not sure what Nick waiting for: every weekend Nick is airing keep it here Nick ads for Warped! But still no word for whether it's cancelled or renewed.
Today at 4:21 PM •••

SweetShop209
For someone who's been around less than a year, Barbie Brooklyn Roberts has gotten plenty of (well deserved) attention.
Today at 2:15 PM •••
K
kanc
According to zap2it, nick@nite will air Seinfeld starting early Tues May 31 2am-4am, that means Mom will be off the lineup after May 26.
Today at 8:29 AM •••