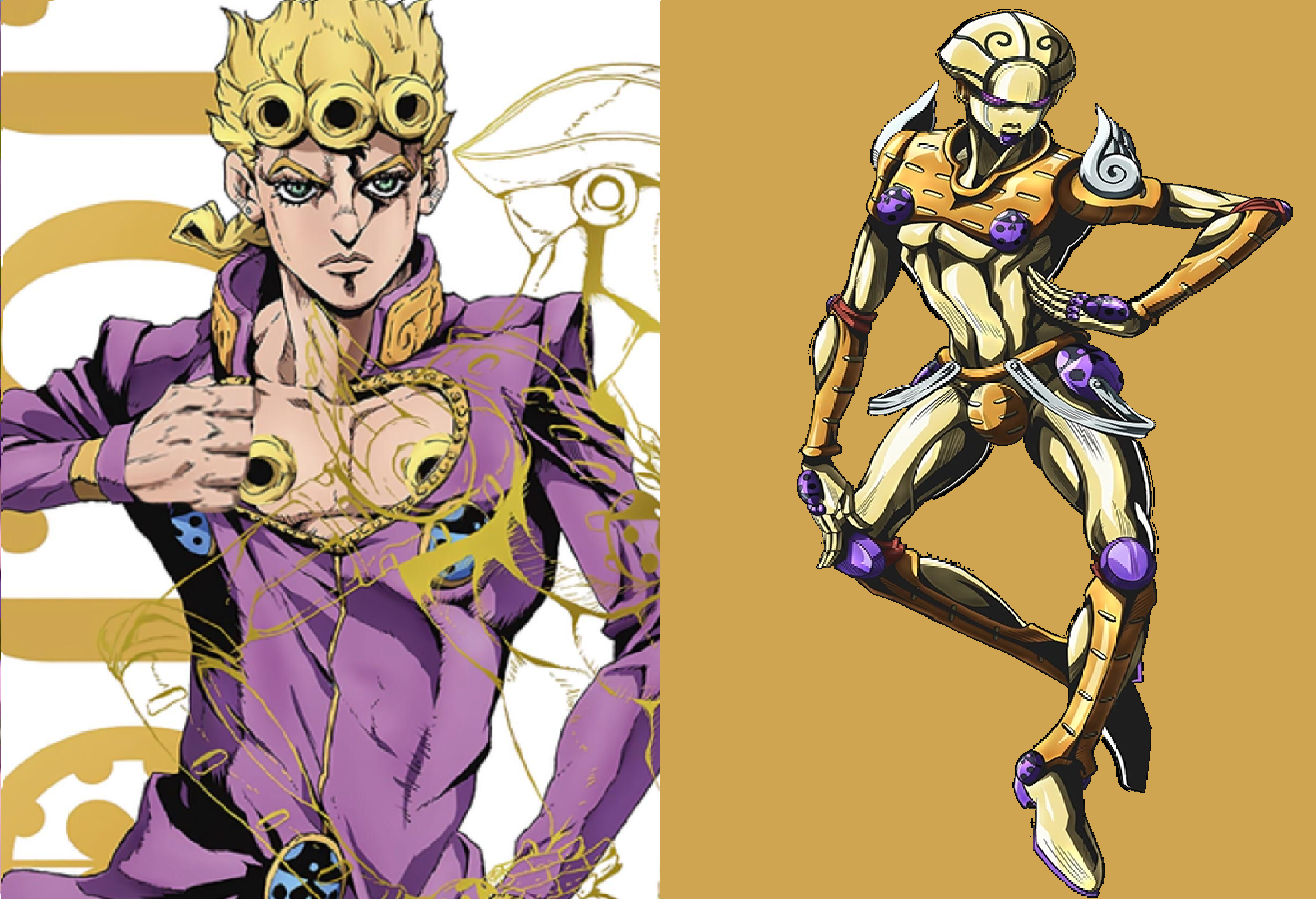 Giorno Giovanni
Voiced by: Phillip Reich
Stand: Golden Wind (JP: Gold Experience)
Abilities: Life Giver and Life Shot
Stats: Destructive Power - C / Speed - A / Range - C / Persistence - D / Precision - C / Developmental Potential - A
Namesake: Giorno (Italian for “day”) / Gold Experience (album by Prince)
Born Haruno Shiobana, Giorno is the son of the vampire DIO (using Jonathan Joestar’s body) and a Japanese woman. Inspired by a nice gangster who helped him as a child, Giorno has made it his mission in life to become part of the mafia and rise through its ranks to become its leader, determined to stop the drug trade that has targeted Italy’s youth. Sometime recently, his hair turned from black to blonde and he manifested a Stand known as Golden Wind, which has the ability to give anything it touches life. Giorno most often uses this ability to transform inanimate objects into living creatures. 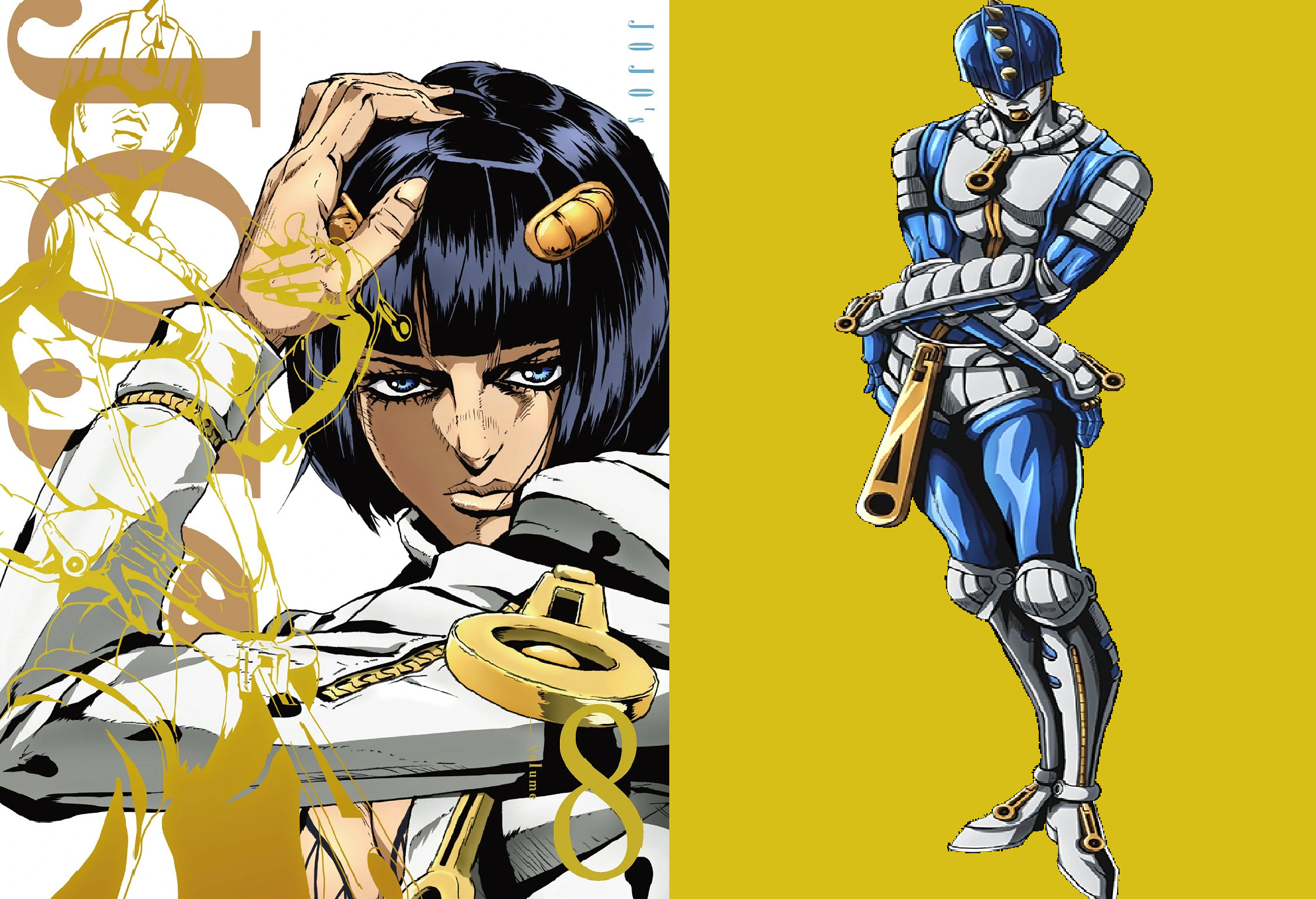 Bruno Bucciarati
Voiced by: Ray Chase
Stand: Zipper Man (JP: Sticky Fingers)
Ability: Zippers
Stats: Destructive Power - A / Speed - A / Range - C / Persistence - D / Precision - C / Developmental Potential - D
Namesakes: “Buccellati” (Sicilian fig cookie) / “Sticky Fingers” (Rolling Stones album)
A member of the Passione mafia, Bruno is one of the more righteous members, sharing Giorno’s desire to uproot the organization from the inside. His Stand, Zipper Man, can create zippers, which can either sever things in two or create pocket dimensions within objects that can hold either himself or other items. 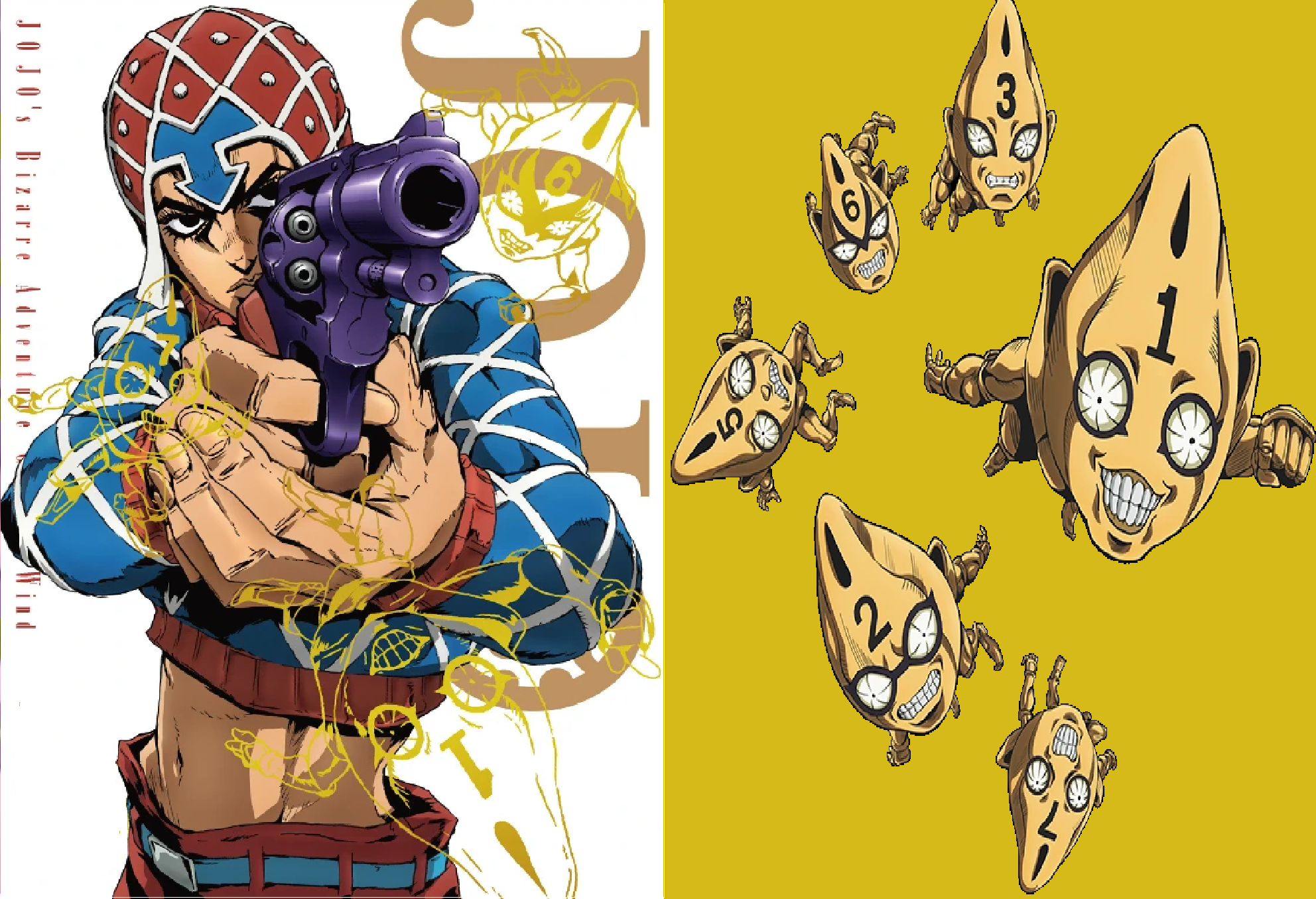 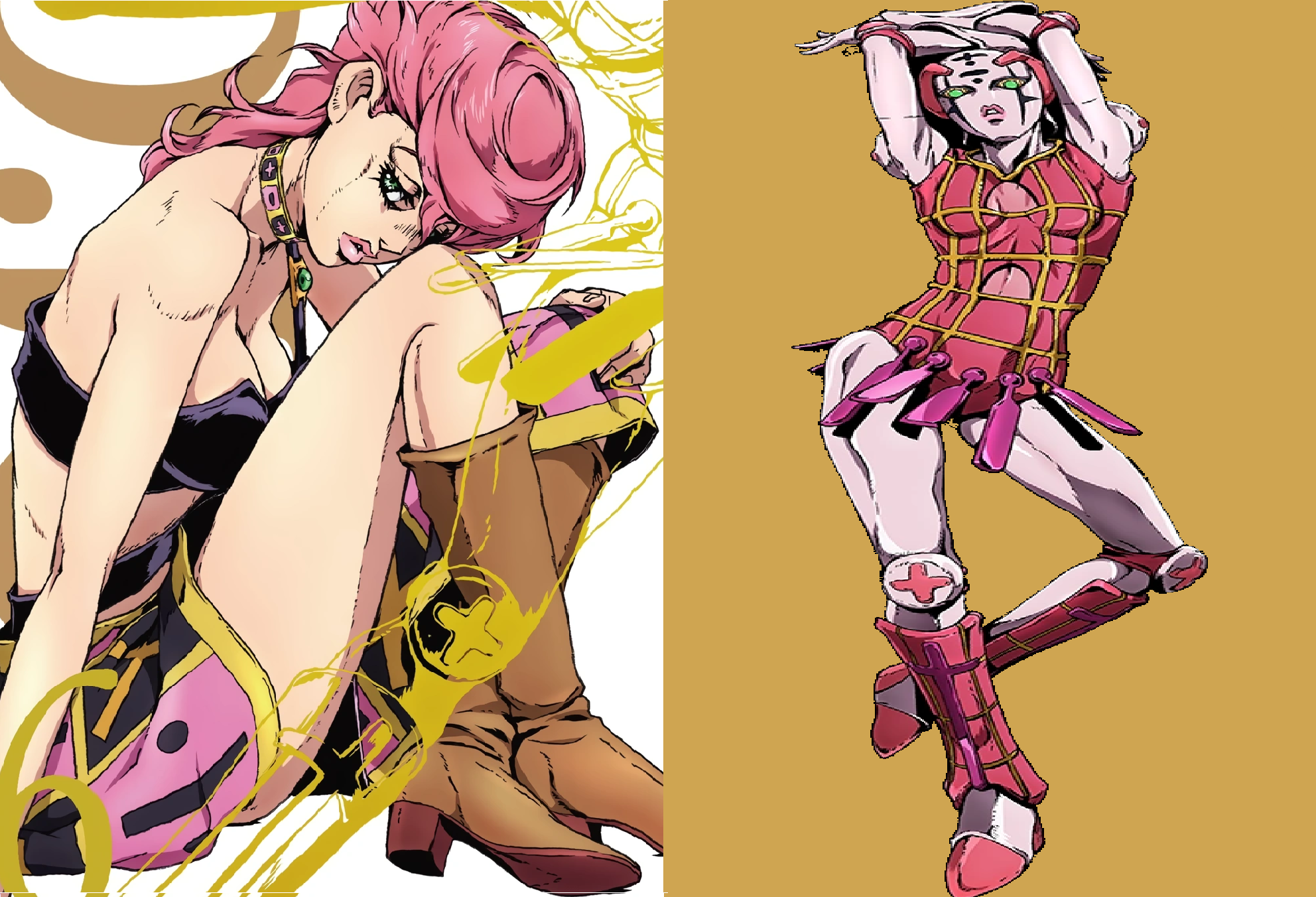 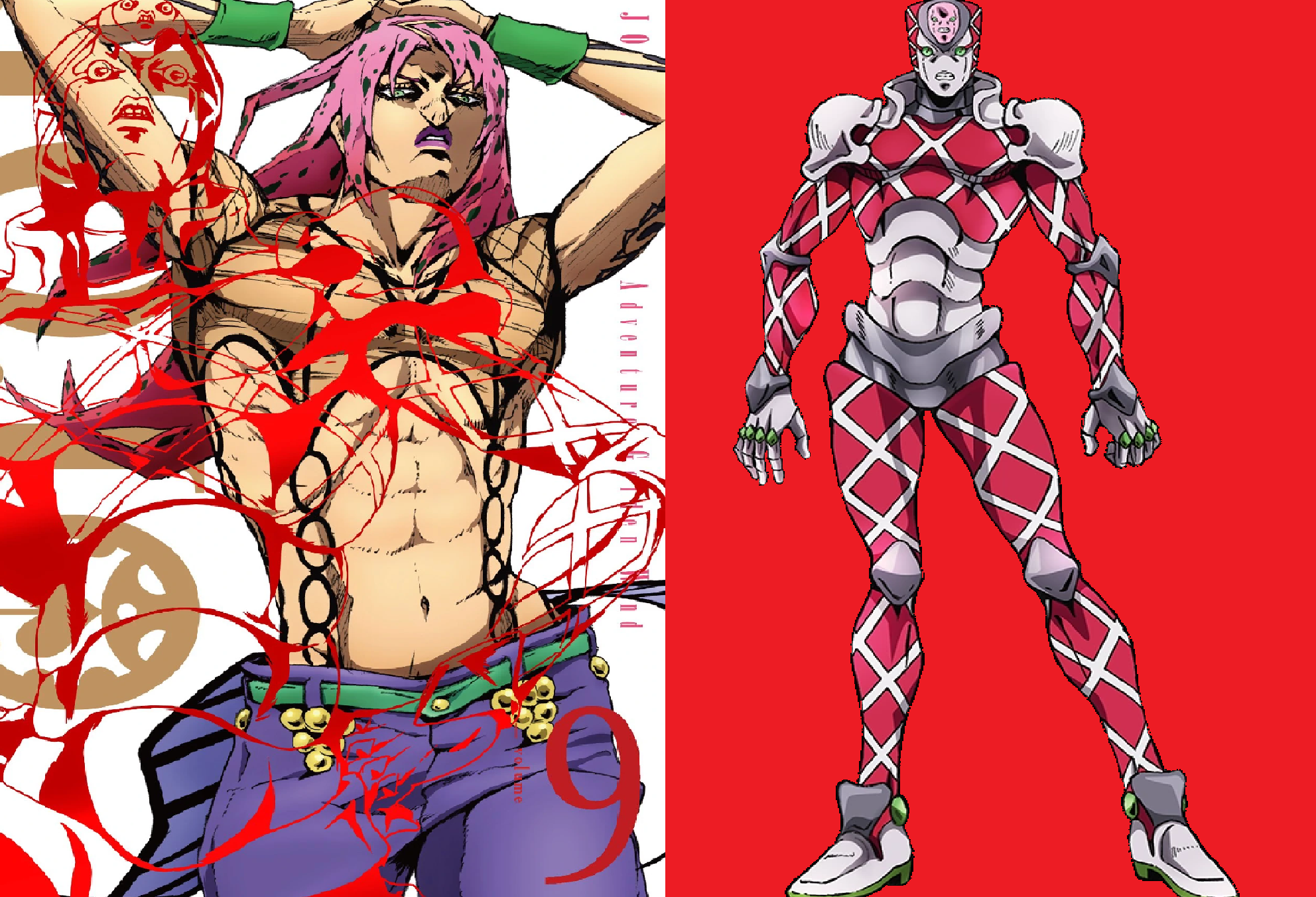 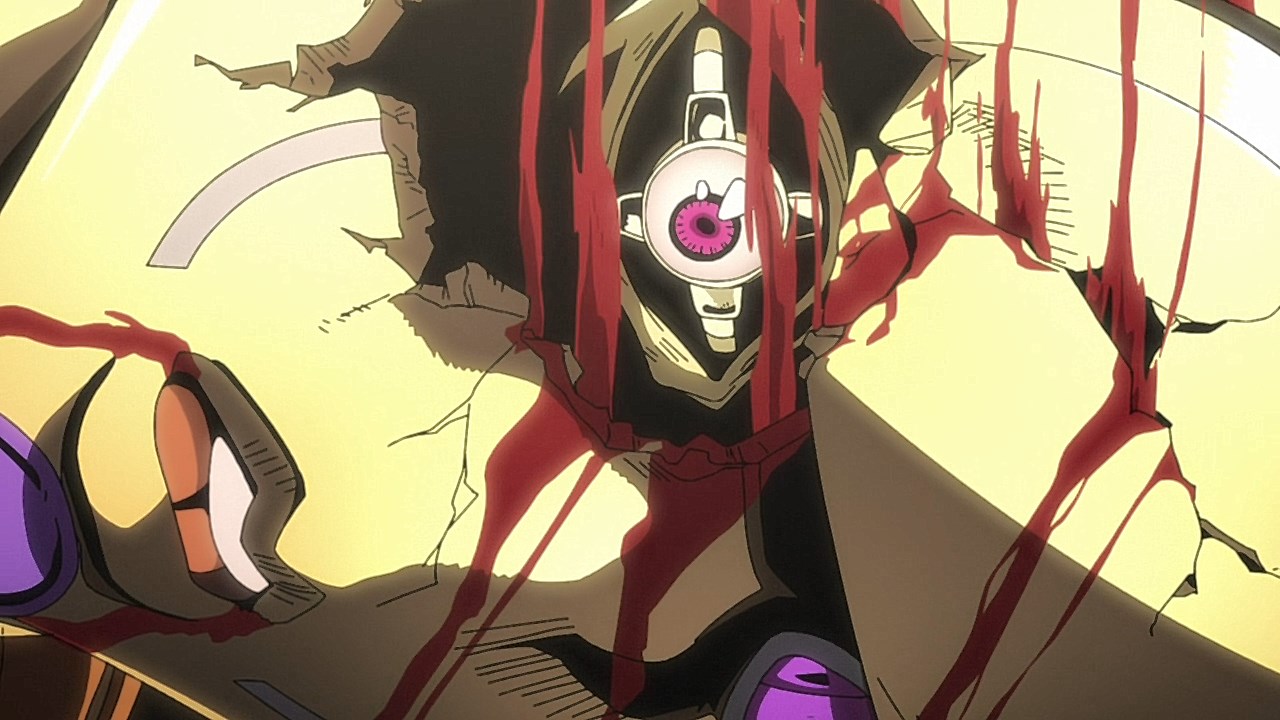 Episodio 37 (150)
“King of Kings”
Chapters adapted: 584-587​
Now:
After solving the mystery of Requiem, Diavolo steals the arrow by taking control of Trish's soul, planning to pierce his Stand. The final battle has at last begun.

This week’s Jukebox is "We March” by Prince from his "Gold" album.

Before the final fight of JoJo Part 5 begins, Here is an interesting video on Diavolo that's speculates he is less Two-Face and possibly more Satan or manifestation of King Crimson itself:

Last time: If he were my father, I'd put myself up for adoption.

Previously on JJBA: Will the real Diavolo please stand up?

When it comes to bad dads, anime really goes all out.

He brought you into this world, and I think he intends to take you out.

A tangerine with zippers.

*sees title*
I am Diavolo, King of Kings. Look on my works, ye mighty, and despair!

The soul game is over. Thank goodness, I was getting really confused.

Been a long time coming, but I guess Bucciarati's finally gone.

Now we'll never know what those things on his head were.

Whoa, cherubs and everything.

Hell of a sendoff Bucciarati is getting. Much more extravagant than Narancia.

So are those mutated people gonna be okay or is that still happening?

What's with his hair? He looks like a mutated strawberry.

This is a weird variation on the Excalibur trope.

Nice one, Crims, you just gave him a makeover.

And this kid is related to Dio?

Again with the time control.

Now Diavolo can form his own chorus line.

I never thought I'd say this, but this is the most confused I've ever been watching a JoJo episode.

Golden Wind Requiem. Canonically the most powerful Stand in the series, because its power is literally "no".

Two episodes left. If you're wondering how we have enough plot left to fill two episodes, technically we don't, but, well, you'll see.
M

In other words: Diavolo can erase cause from effect.
Requiem’s power erases effect from cause.
Last edited: Oct 11, 2020

RIP Bucciarati, but did one last great act. Wow, they got really illustrative with his send off.

Oooh yeah, Diavolo gets a taste of his medicine at last. Just like the finale between Jotaro and Dio. I guess the World was more about stopping time but Crimson is about predicting then changing time. But that is worthless against Golden Wind Requiem with essentially the power of Ctrl+Z.

Nobodyman said:
Hell of a sendoff Bucciarati is getting. Much more extravagant than Narancia.
Click to expand...

Bucciarati does one last noble deed and ascends to Valhalla. Narancia gets impaled on some railings and Giorno simply takes his body back.

Kitschensyngk said:
Bucciarati does one last noble deed and ascends to Valhalla. Narancia gets impaled on some railings and Giorno simply takes his body back.
Click to expand...

Narancia's stand did have the fly over and Giorno did create the flowers around his body at the stadium.
You must log in or register to reply here.

Vuxovich
No offense intended, but I think that canceling Jaydeep Hasrajani's "Boons and Curses" is like a punishment for the said show's creator being involved in the hated 2016 Powerpuff Girls reboot. Your opinions on my comment?
Today at 8:03 AM •••