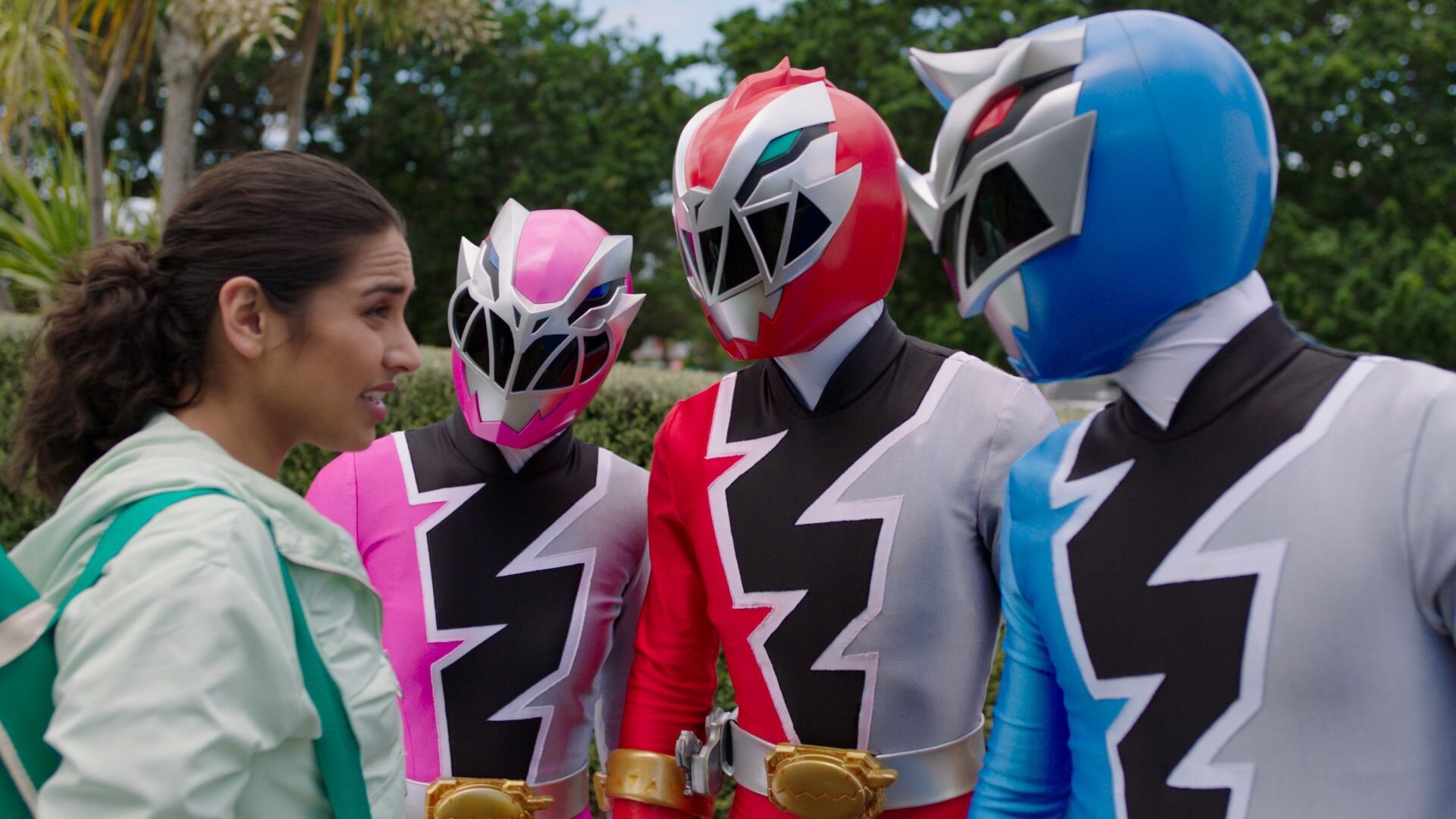 Episode 4 - "New Recruits"
Air Date: March 20th, 2021
Void Knight’s new general, Boomtower, tries to steal a mysterious Orb from the city museum. When the Rangers struggle to stop him, they get help from an unexpected source.
Last edited: Apr 3, 2021

She's definitely the first gender-swapped Ranger I'm aware of since the Yellow Ranger from Mighty Morphin'.

Gender-swapped Rangers were still pretty common in the franchise up until Wild Force. Always Yellow Rangers for whatever reason.

Fun episode this week. Javi and Izzy seem like fun characters and Izzy got some amusing battle banter.

-The running gag with no one seeming to know or care about Draknorok's name was amusing.
-Also, Draknorok sounds like they had a better Goldar voice than the actual returning Goldar in Beast Morphers.
-The slime-to-solid sequence for Mucus looked pretty good.
-I sincerely hope they have Izzy doing more dual-wielding with the sword and lance. That was awesome.
-I'm surprised they even bothered to justify why Izzy's suit doesn't have a skirt. She just yanked it off like it was nothing.
-I could feel the cringe from Zayto attempting to use modern slang.
-I'm vibing with Ollie at the end. I feel like he's going to fill a Cam role of just being surrounded by lunatics.
-The post-battle shot of the Rangers and their Zords was amazing.

Scrappy-Fan92 said:
Gender-swapped Rangers were still pretty common in the franchise up until Wild Force. Always Yellow Rangers for whatever reason.
Click to expand...

I always thought it was probably because out of all of the unisex colors in Sentai history, yellow was the one most commonly used for both genders than blue. White has been used for both sexes, but I say blue because that's one color that ever Sentai series has.

This season is interesting. It's kind of lousy which isn't great. But it also isn't outright horrendous which is nice (and a bit refreshing).

I loved the Green Ranger ripping off her skirt. Remember what I said about refreshing?

There is still dumbness present though. Does Izzy REALLY need Zaytos to tell her that if you aim a javelin higher, it will go farther? I feel like that deserves a special edition of "Really?! With Seth And Amy".

Everything else was all right though. ***.

A preview clip for this Saturday's episode. 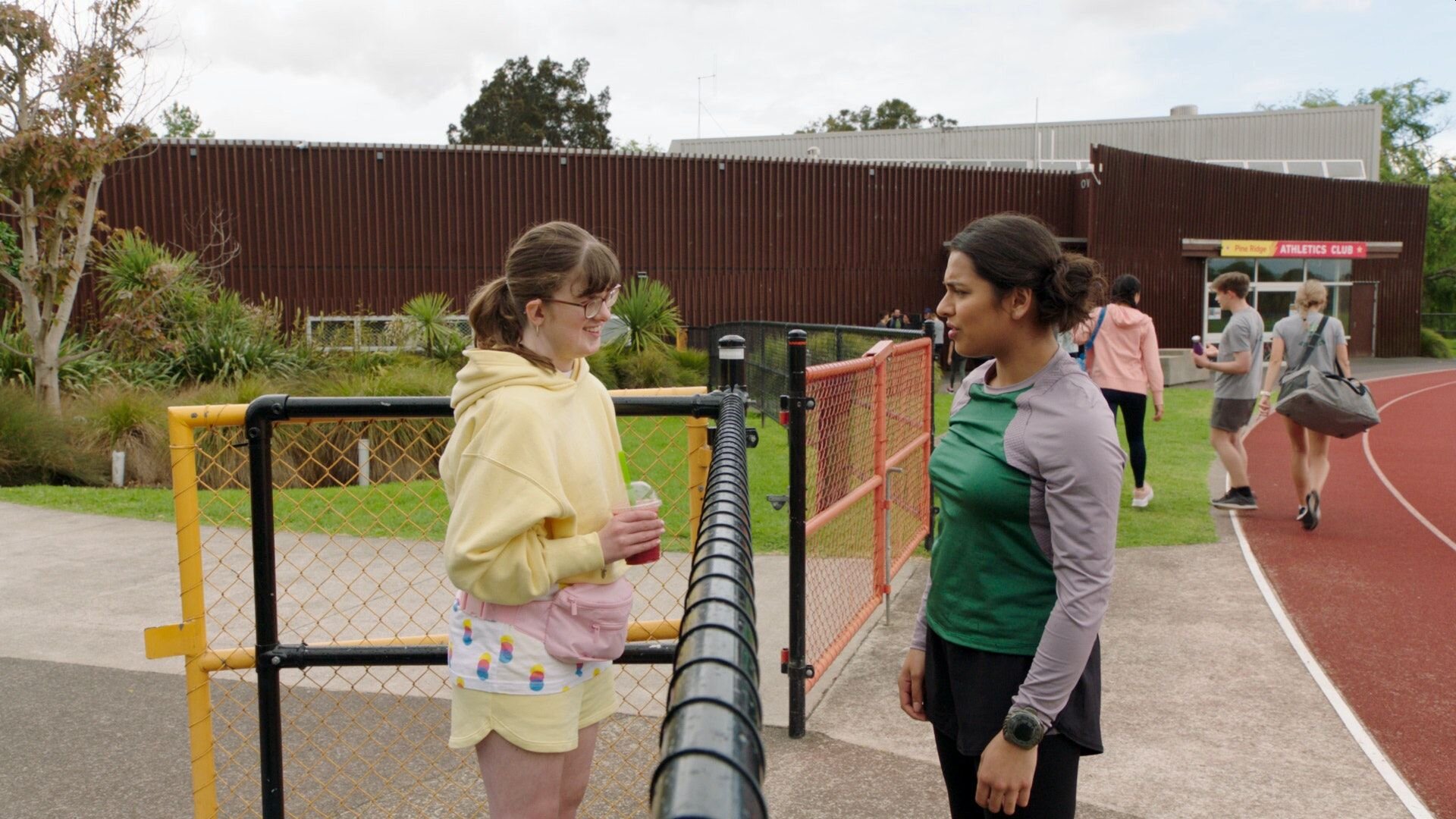 Episode 5 - "Winning Attitude"
Air Date: March 27th, 2021
Izzy is determined to win a big race with the help of her Special Olympics athlete cousin, Lily. After Lily misses a training session and Izzy rejects more help, her sportsmanship is put to the test.
Last edited: Apr 3, 2021

The monster Brineblast was voiced by Jason Smtih, who played Casey the Red Jungle Fury Ranger.

Lily was played by Sarah Dalton, who's an actual Special Olympics New Zealand athlete with an intellectual disability.


We now have a description for the 8th episode, "Unexpected Guest".


A familiar face arrives on earth and Zayto dismisses his quest as a distraction. After he saves the Rangers from a powerful Sporix Beast, Zayto realizes an important lesson.

Here is why I think that: I believe that the last five episodes of this season will need to be worse than any previous Power Rangers episode I've ever seen to lose me after this episode. And if I may be blunt. That might not even lose me. This episode amazed me and I am willing to forgive almost any bad thing that comes next because of it.

I love what they did with Lily. I have never seen a kids show treat a mentally disabled character this way and I loved it. The first thing I loved is that Lily tells everyone she's intellectually disabled and nobody bats an eye. I love that because one of the things I noticed about mentally challenged people growing up is that they refused to admit they were slow, because of the stigma attached to it. They were actually ashamed of that aspect of themselves. And considering that is the aspect most people notice first, that is not an inconsiderable chip on their shoulders. Lily stating that as if she's discussing the weather, and everyone listening acting like it is no big deal and doesn't matter, hit me like a ton of bricks for how awesome it is.

What I especially love is that when Lily walks off, none of the other Rangers tell Izzy what a great friend and cousin she is to give Lily the position of coach. See, Lily's actually earned that, and none of the Rangers are treating Izzy like some kind of saint or martyr for having her play such a big role in her life. The fact that Lily is disabled doesn't come up again with the Rangers. It is unimportant and doesn't matter.

The third thing the episode did that I loved is something that will bother some people, but I think people need to think a little better about it. Izzy is unfairly berating Lilly for not coming through for her. On the surface that is an appalling way to treat a disabled person.

But what it also is, is a normal and relatable way to poorly treat a supposedly "normal" person who is your friend and peer. The lesson isn't that Izzy is a monster for speaking to a mentally challenged person that way. It's that she's being a bad friend for speaking to her normal friend that way. The optics are terrible on the surface, but the subtext is majorly healthy for kids to see and absorb.

Some other nonsense happened in the episode that I didn't give a fig about. But the stuff with Lily knocked my socks off and I will almost assuredly be giving the thumbs up to this season, which is not something I've really done since the Mighty Morphin era. We'll see, but they would have to blow things beyond all reason to lose me after that. *****.

Fone Bone said:
I will almost assuredly be giving the thumbs up to this season, which is not something I've really done since the Mighty Morphin era.
Click to expand...

Have you...watched a good amount after the Mighty Morphin Era? I get that everyone has their version of what's good Power Rangers since there have been many iterations for anyone to latch to, but I thought it became a common sentiment among PR fans that post-Mighty Morphin, they actually upped the production and got actors who can act to go with the more engaging storytelling & character development. Basically, Western equivalents to the Super Sentai; all of which were still accessible to the target demo.
What people call the Neo-Saban Era is just that and so we're back to exclusively the same demo as Nick's kid sitcoms, even though the school kid angle hasn't been presented enough to justify the tone.

Mostezli said:
Have you...watched a good amount after the Mighty Morphin Era? I get that everyone has their version of what's good Power Rangers since there have been many iterations for anyone to latch to, but I thought it became a common sentiment among PR fans that post-Mighty Morphin, they actually upped the production and got actors who can act to go with the more engaging storytelling & character development. Basically, Western equivalents to the Super Sentai; all of which were still accessible to the target demo.
What people call the Neo-Saban Era is just that and so we're back to exclusively the same demo as Nick's kid sitcoms, even though the school kid angle hasn't been presented enough to justify the tone.
Click to expand...

No. I think I got back into things around Samurai.

Fone Bone said:
No. I think I got back into things around Samurai.
Click to expand...

Woah. and your last one Mighty Morphin or was it Wild Force?

I dropped out in the middle of Turbo. I managed to see Forever Red when it aired (and I thought it was great). Other than that my Power Rangers watchage is a bit limited. 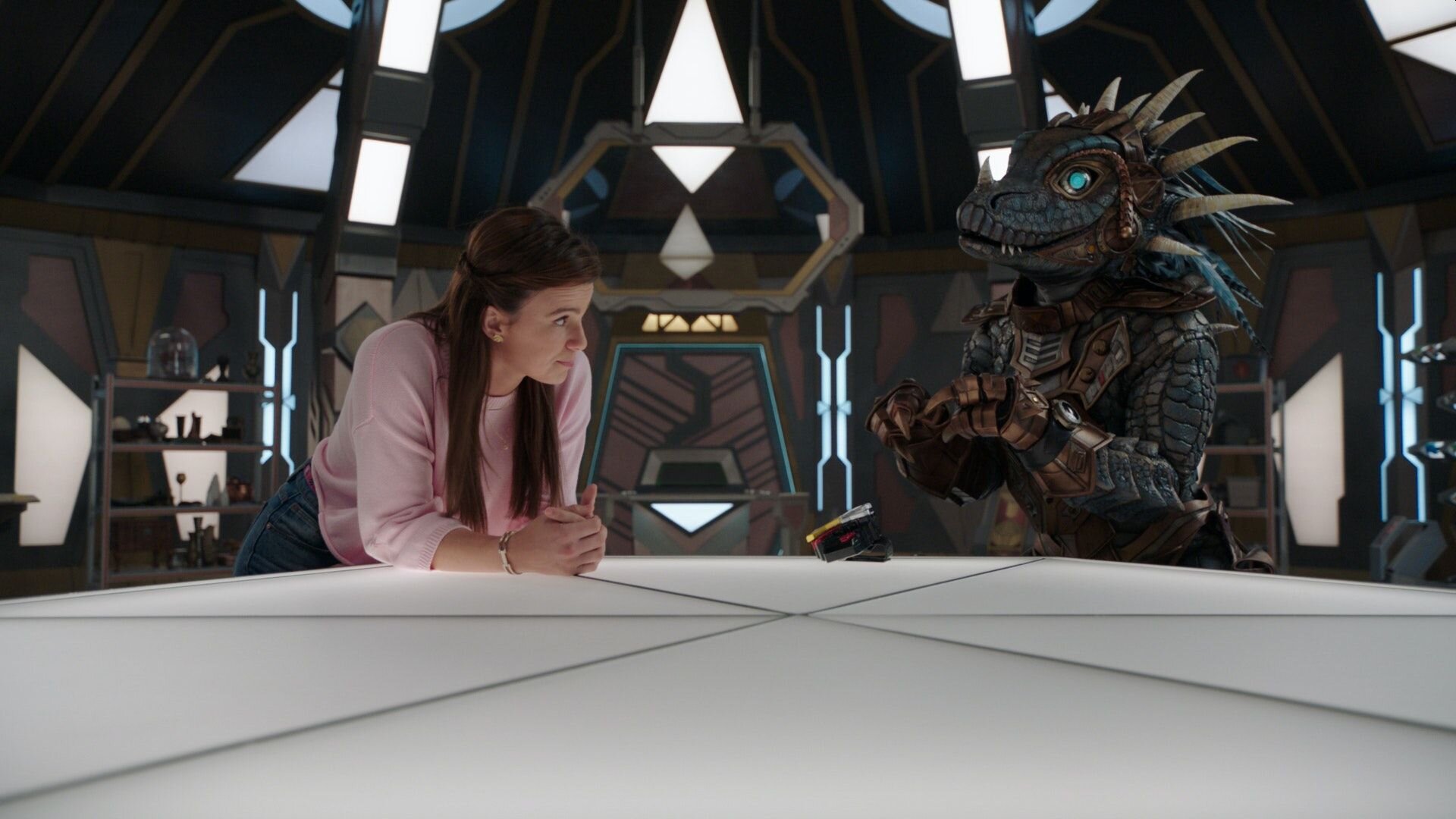 Episode 6 - "Superstition Strikes"
Air Date: April 3rd, 2021
Amelia thinks she’s cursed with bad luck and is reluctant to help the Rangers, afraid she’ll cause more harm. But when monsters attack the base, she learns the truth about luck.

Wow, that was super dumb. Indefensibly so. *.

I missed a few things.

-I was wondering if Lily was played by an actual actress with autism, and it seems she was. Even more, the actress in question is an athlete herself. Nice.
-I think the show did a relatively respectful job portraying a character with autism, though I'll leave final judgement to those on the spectrum. I admittedly didn't catch the part of Lily being Javi and Izzy's cousin until the very end of the episode.
-Fans asked for Rangers with "real" flaws and emotions again, and I guess we've got it.
-I enjoyed Jane and J-Borg's lesson for the kids. Something about the civilian element of this season feels a bit more involved when there's a hotline to get the Rangers' attention.

-"Cringe", "Okay, Boomer", and some other thing Izzy said. Truly, these are Power Rangers for the modern child.
-I can't even lie, "Okay, Boomer" was legitimately funny and I hope Boomtower keeps getting called that by everyone.
-The MOTW was just getting insulted by friend and foe alike. I almost feel bad for these creatures of mass destruction.
-Solon's telescopic eye thing was cool.
-This whole episode premise was very silly, but this is a universe where Rangers actually can and have been cursed with real bad luck, so I'll let it slide.
-Clever use of the teleportation to get Boomtower out of the base. Gosh, I missed teleportation.
-Jane and J-Borg were missing from this episode, so I guess Ollie had to fill the slapstick quota for this week.

EDIT:
I forgot to mention, the way the monster was defeated during the Megazord battle was absolutely hilarious.
Last edited: Apr 5, 2021

The Gold Dino Fury Ranger will be named Aiyon, played by an actor named Jordon Fite.


Also, an article with some shots of him from the show, as well as an interview with the actor, and a clip from tomorrow's episode. 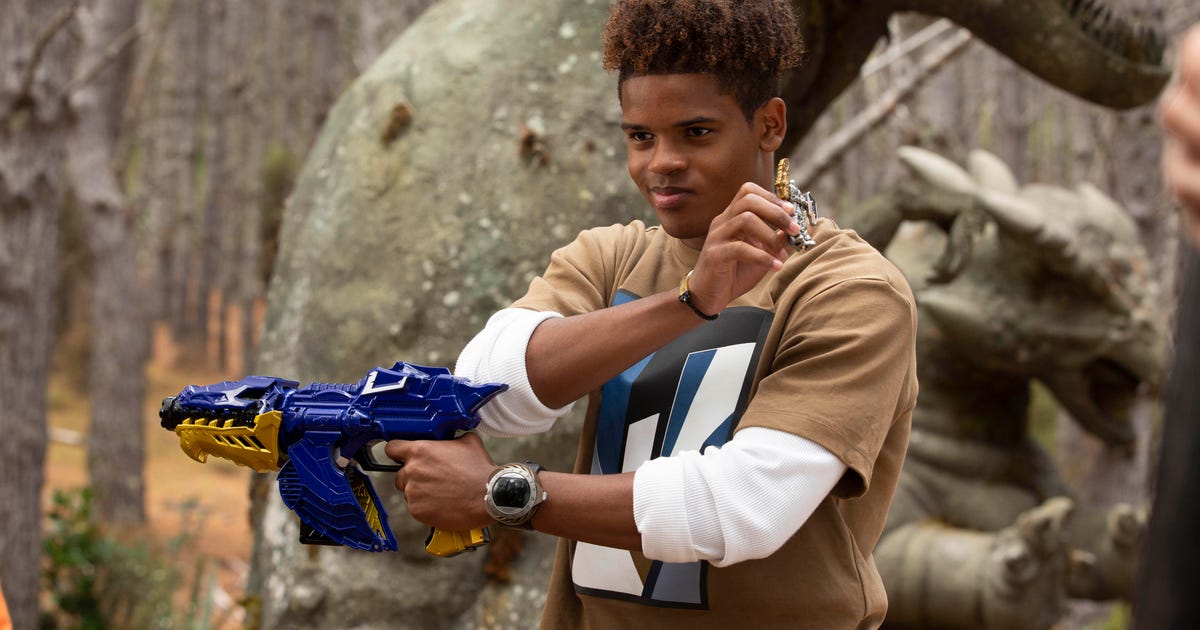 Exclusive: Fite is the first African-American actor to join a Power Rangers series as the team's sixth ranger.

Then another clip from tomorrow's episode.


Lastly, a clip from next week's episode, which will probably be the last before the hiatus.

What would you change about each and every Power Rangers season?

Vuxovich
No offense intended, but I think that canceling Jaydeep Hasrajani's "Boons and Curses" is like a punishment for the said show's creator being involved in the hated 2016 Powerpuff Girls reboot. Your opinions on my comment?
Today at 8:03 AM •••