Roxas_Sora said:
The revelations on "Hollow Mind" were really tetric. Now I see Belos as the kind of villain that Demona is, blinded by irrational hated.
Click to expand...

Edge Of The World

You think after this week's episode, we get a cool down, but no we go deeper. So the whole pay off with King's origins is a titan.

Kind of ironic, beginning of the series, King boasting how powerful he is, and played for a joke, but he might have some hidden power here. At least power people fear, since Belos convinced the world to be afraid of titans.

If we can get the Bowling Isle to believe that, that could be be key to getting them to believe Belos is a liar.

Still tough episode for King, it is very likely any blood relatives are gone for good.

And we end on the big cliffhanger, Belos finally making his move. Did they sneak out of the owl house before that, or are they still in there, such a cliffhanger.

I'm kind of satisfying they continue the story from the previous episode, so Luz could tell Eda, King and Hooty what Belos is actually planning.

Bill the leader of the Titan Trappers was voiced by Cricket Green? I didn't noticed at first.

The Titan Trappers turns out to be the Cult of The Collector, and what's worse, they were sacrificing King to summon The Collector with his blood. Double shock.

Poor King... He just learned about his true identity and it hurts to see how traumatized he was.

And of course, episode ends on a cliffhanger. *sigh* Time to wait for the next week to see what happens next.

Edge of the World: I like that we get to see Luz explain everything from last week instead of her telling Eda and King offscreen like shows like to do lately. Hooty finally coughs up King's letter and this leads to another bombshell. I've heard theories about King being a Titan, so I'm not surprised that it turned out true. Though, it's strange that a lot of Titans look like King since the one on the Boiling Isles clearly has a human-like face. I'm a little disappointed that Tarak and the others weren't really of King's species but I'm kind of glad since Tarak's appearance did feel off.
The link between the Titan Trappers and The Collector further hints that The Collector will be the true main antagonist of the series. I'd bet the season 2 finale will either end and a cliffhanger with Belos succeeding or Belos' death with The Collector taking his place. The Collector has shown us nothing of his character expect wickedness.
Cricket....I mean Bill seems like another version of Belos since both are working with The Collector and Both are lying to their people. I wonder if this is the last we see of the Titan Trappers since their way of reaching the Boiling Isles has been destroyed?

Poor King, last of his species. Kind of Strange that such powerful creatures are nearly extinct. The ending with King talking to the Boiling Isles felt like he was talking to his father, but that should be impossible since the Boiling Isles Titan would be millions of years old with life having evolved from it's carcass. Of course there's still more mysteries around King's past. Like who made Jean-Luc and the others?, Could they possibly made from King's father's body? And of course there's the Medallion that probably holds all the answers.
G

Now that we know that King is the last titan, he might be the key to defeating Belos and the Collector.

King needed this - all this God Tier episode character development, that is. Here's hoping he has something to give to the coming fight against Belos because it's win or die trying time here on what's left of The Owl House.
Bonus points to this episode was seeing Eda be so damn vulnerable - that was such a wonderful humanizing moment for her character. That, her sister (Lilith) comforting her like that. Again, I just wish Eda and Luz spent more time together doing all this - my only real gripe here with such a perfect setup to the inevitable end incoming here.

Okay, take care - and hope for the best. DOWN WITH BELOS (YAH OLD FREAKIN' LOSER.)!
R

I think it's Ted Bundy.

Either way, I can't avoid to see Belos' story being essentially like Cain's, you know, for killing his brother Abel.

You know I have a feeling Belos is going to be defeated at the end of season 2. And those 3 45 minute specials are going to be aftermath stuff, like the last season of Steven Universe.

zoombie said:
You know I have a feeling Belos is going to be defeated at the end of season 2. And those 3 45 minute specials are going to be aftermath stuff, like the last season of Steven Universe.
Click to expand...

I have a feeling that the Collector will double-cross Belos on Unity Day and become the new main villian for Season 3. If there is anyone a villain can trust less than a hero, it's another villain.
Last edited: May 4, 2022

I admire your optimism, y'all.

For me, I just really hope these 3 specials are well planned out enough, as it is. Because just seeing Belos get defeated and not doing anything special with this new villain controlling him would feel like wasted potential, otherwise.

I'm all for seeing some form of epilogue for our MCs, but it needs to mean something (OFF TOPIC: I'm still disappointed in how Adventure Time: Distant Lands ultimately turned out, honestly..... And that's me being nice about it - whatever that did, Summer Camp Island has done better in its later (current) seasons, IMHO.). AND by means something, I better see what happens to everyone we're meant to care about, not just whose the most popular of the MCs, personally.

Shame on Disney for cancelled this series. 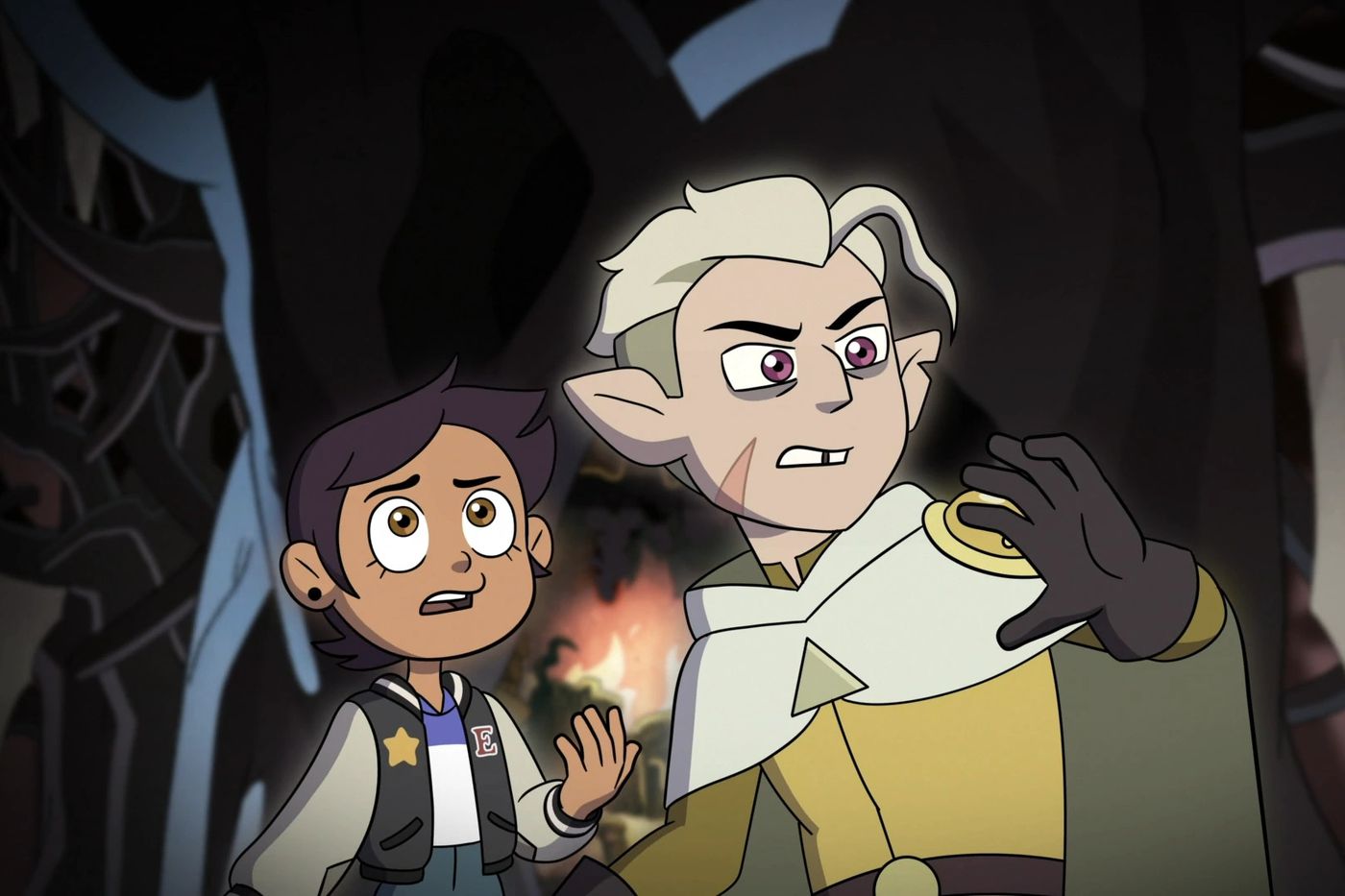 glennbyrnes said:
I have a feeling that the Collector will double-cross Belos on Unity Day and become the new main villian for Season 3. If there is anyone a villain can trust less than a hero, it's another villain.
Click to expand...

Oh yeah most definitely. The Collector seems to commit acts of violence and evil for simply the pure joy of it. Once he gets what he wants from the Day of Unity, I doubt he'll need Belos anymore.

Apparently, the creator has been pirating her own show! Wouldn't this be a thing that could get you in trouble with your employer, especially if that employer happens to be Disney?

For an episode in which none of the stars are involved, it is pretty good!

An interesting episode here as all the main characters are no where to be found, and the focus is completely on the supporting cast. I love episodes like this, when a shows challenges its supporting cast to carry an episode, and they held up their end.

The Gus story is good, he is so trusting that people take advantage of him. He thinks that is a weakness, but really is because he sees the best in person, and why he often gets screwed over. Luz is similar though in a different way.

I knew the unlikely ally would be Hunter, I mean why wouldn't it be. And it seemed Hunter finally accepts truth, though in real life, I don't know it would have happened this fast.

The Willow / Amity B story was okay, though we don't see much of their past relationship, I wouldn't know how Willow is different. It seemed like this is just forced drama.

1) An episode that focuses on Gus developing a character worth something by tackling some of his negative emotions and truly proving his worth in battle - this should not have come so late in the show's run, honestly.

Same with Willow and Amity actually becoming friends again and having it be believable. This should have happened earlier, IMHO. Don't get me wrong, however - I'm so happy to see this, regardless, especially how much Willow has grown on me as a character.

2) Hunter is still a dork in my book, but he is becoming less of a loser by accepting the truth and realizing who the real good guys are, as well as actually helping them for once in a real way, at the end of the day. Him and Gus bonding for real like that made this episode stand out in a positive light for me.

3) Seeing this school setting allow magic to not be reduced to you know one thing and that's it gives me hope for this setting's future - being able to know more than one thing, wear multiple hats? That's not just logical, it's essential - especially in any and all rough economical times. Just like IRL, especially right now.

I just hope / wish it wasn't just this one school being okay with this, however. So many schools in this setting would be legit successes if they defied this idiot Emperor, at the end of the day - especially like they need to be if they know the truth about what a scumbag Belos truly is.
I can see, as a result of doing so, a much more productive society that can take care of itself in good and rough times, which is always better than knowing just one thing and not much else (which also applies to IRL.) FACTS AND TRUTH.

HIGH TIER EPISODE this week - because while not perfect, what it's trying to get across was still worth exploring. I only wish more episodes in general didn't have Luz and Eda in them that were this good and developed these other characters we want to care about so much (and should as well, IMHO.).

In a way this episode is the Owl House version of "Turning Point", with Hunter being the Sasha of this episode. And the same thing was accomplished plot wise which is everyone learned the villain is evil.
G

By the looks of things, it seems that even Belos' own coven is starting to be fed up with him.
C

The show lost the GLAAD Media Award for Kids & Family Programming to Power Rangers.
You must log in or register to reply here.

Today at 3:24 AM
Elijah Abrams

Games You Still Own From When You First Purchased Them?

Fone Bone
Check out @Zentron 's Art Stuff on The Drawing Board!

For my first, I'll be posting some of the work...

Some very cool animated clips and reworkings of Dungeons And Dragons and He-Man and She-Ra scenes. They start in earnest on Page 3

OK, to go with Sheila's new state of being...

So both movies are tied with 2 votes each. I can't think of which one I like more, so the one with the highest IMDb score moves to the next round. That movie is Scooby Doo Frankencreepy. The next matchup is between Surf's Up and Wish Dragon.
Today at 6:01 AM •••

Kitschensyngk
Oh, lord. They're coming back.

Yesterday at 6:46 PM •••
K
kanc
For Nickelodeon had season finales, Nick never promoted it as finale, examples: Danger Force, Side Hustle, Warped, etc.. then again, its not first time, its been like this quite some time.
Yesterday at 2:43 PM •••